ST. PAUL, Minn., Dec. 8, 2020 /PRNewswire/ -- A tech challenge to invent a better way to track polar bears is moving out of the lab and into the Arctic. Wild polar bears are testing out new prototypes created by 3M scientists through a voluntary Polar Bears International (PBI) challenge. The pilot tags are non-permanent and combine currently available satellite transmitters with innovative ways to attach them. 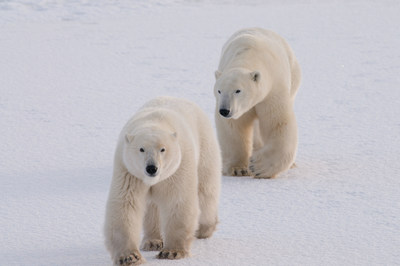 "This is a significant moment for polar bear research and conservation"

"Traditionally, scientists have used satellite collars to follow polar bears, but the collars can only be placed on adult females," said Geoff York, senior director of conservation at Polar Bears International. "Adult males can't be collared because their necks are as wide as their heads, and young bears grow too quickly to be safely collared. As transmitters have become smaller researchers have tested GPS ear tags and implants. But ear tags must be permanently attached, and implants require minor surgery. The devices designed by 3M represent a major potential step forward—they could be used on all classes of polar bears and would allow us to obtain critical data with the least impact possible."

Researchers study polar bears behavior in the Arctic to better understand movement patterns and habitat use while collecting other data. But scientists are always looking for ways to improve existing technology and make research less invasive. In this case, the challenge was to create a way to attach a tracking device to a polar bear's fur.

Four new prototype polar bear tracker tags are being tested on polar bears in Western Hudson Bay in the far north of Manitoba, Canada, and will later be tested in zoos that routinely conduct research to benefit conservation. The prototype tags are non-toxic, temporary and attach only to the bear's fur.

"I am tremendously excited to take this science out of the lab and into the Arctic on wild polar bears. This challenge really exemplifies the collaborative spirit, science and creativity that drives innovation at 3M," said Jon Kirschhoffer, an advanced research specialist in the 3M Corporate Research Systems Lab.  "We are proud to help support Polar Bears International's work in studying polar bears."

Jon's son BJ Kirschhoffer is director of field operations at Polar Bears International. He grew up knowing about how 3M applies science to solve all sorts of problems.  Thus, PBI came to 3M to see if its scientists could help develop a solution.

"I asked my dad if the 3M technical community could figure out how to stick a tag on a polar bear, and they rose to the challenge," BJ said. "They liked the environmental aspect of it and the chance to contribute to polar bear conservation."

The prototypes range from mechanical solutions to adhesive solutions and some were a little bit of everything. Some of the concepts utilized existing 3M technologies and some ideas were completely new. All need to be able to withstand the usual: extreme cold, snow, saltwater, and some polar-bear specific actions: rolling in the snow, for example. The "burr on fur" approach allows the device to latch onto and "stick" to a polar bear's fur.

While not involved in this project, Dr. Megan Owen, corporate director of wildlife conservation science for San Diego Zoo Global, is excited about the prospects. "The Burr on Fur project could provide a real breakthrough in how we track wildlife," she said. "It's an exciting innovation that could go well beyond polar bears to help us study species from leopard to giraffe."

Polar Bears International is testing the prototypes as part of ongoing tagging and tracking work on the Western Hudson Bay polar bear subpopulation in collaboration with the University of Alberta and Dr. Andrew Derocher. In addition to tags helping partners track the bears for research, improved tagging technology may provide opportunities to better warn communities of approaching bears in the event they return to Churchill or move towards communities further North.

Polar Bears International also plans to test tags on zoo bears, working with zoo and aquarium partners in their Arctic Ambassador Center network. Zoo bears serve as ambassadors for their wild cousins and enable scientists to conduct research that would not otherwise be possible.  In the case of the tags, deploying them on zoo bears will enable researchers to closely monitor how they perform under various conditions.

"This is a significant moment for polar bear research and conservation," said Krista Wright, executive director or Polar Bears International. "As the Arctic continues to warm and sea ice melts, creative and innovative advances in research methods and technology are critical to furthering conservation efforts—for polar bears and for wildlife around the globe."

About Polar Bears International
Polar Bears International's mission is to conserve polar bears and the sea ice they depend on. Through media, science, and advocacy, we work to inspire people to care about the Arctic, the threats to its future, and the connection between this remote region and our global climate. PBI is the only nonprofit organization dedicated solely to wild polar bears and Arctic sea ice, and our staff includes scientists who study wild polar bears. The organization is a recognized leader in polar bear conservation. For more information, visit www.polarbearsinternational.org .
PBI Contacts:  Annie Edwards, annie@fabricmedia.net and Melissa Hourigan, melissa@fabricmedia.net, 720-608-1919.

About 3M
At 3M (NYSE: MMM), we apply science in collaborative ways to improve lives daily. Our 96,000 employees connect with customers all around the world. Learn more about 3M's creative solutions to the world's problems at www.3M.com or on Twitter @3M or @3MNews.